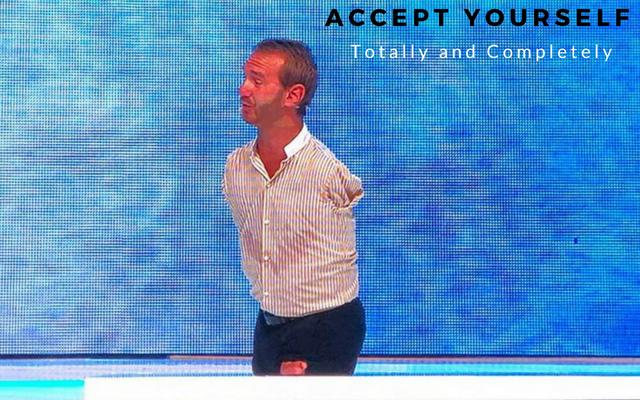 How often have you looked away when you see someone with some form of disability?

Do they make you uncomfortable?

I’ve since gained a totally new perspective with such a situation.

I had the privilege to listen to Nick Vujicic live two weeks ago.

I heard a comment that when Nick went on stage, the visual of him without limbs hit this person’s senses. But after a while, it didn’t bother her that he has no limbs. He’s no different from us and he has proven that he can do almost anything that we can.

That got me reflecting. What did he do to change the initial perception of discomfort? He is just like anyone of us!

It became clear that in his eyes, he is as complete a person as any one of us. Granted he has no limbs, that’s not going to stop him from anything!

Because he sees himself as complete, we saw him through his eyes! And we began to resonate with what he said.

That was indeed an enlightening moment.

The starting point of self-acceptance begins when you accept you just as you are at this moment in time. You do so wholeheartedly. Then observe the difference around you.

I put this to the test when I was on stage two days ago. And what a tremendous difference!

Those who heard me previously told me that they saw the change.

I felt literally weightless, like I was on a cloud. What an awesome experience.

It’s a liberating experience when I realised that I as the one all these while, clipping my own wings.

Do you want to know how to accept yourself totally? Reach out now!.